In an extraordinary economic boom, Frankfurt publishers produced a variety of illustrated alchemical publications within only a few years. It is no coincidence that this production phase coincided with the zenith of alchemical literature in Europe and the search for the philosopher’s stone. Even then, Alchemica Illustrata from Frankfurt stood out from the crowd. To this day, the striking pictorial inventions are still to be found in every manual on alchemy or natural magic of the early modern age. They are an integral part of the cultural pictorial memory, which in recent years, in the course of innovative research on alchemy, has once again increasingly become the focus of cultural studies.

From the perspective of the history of research, the research and student project places the thematically different pictorial inventions, which often originate from Matthäus Merian the Elder (1593-1650) and set new standards in artistic and intellectual quality, at the centre of art historical interest for the first time. The project will examine Merian’s original categories for the design of the title copper and allegorical picture sequences, the iconographic, partly medieval models, and also the significance of motif transfer. Not to be forgotten here is the exchange with Merian’s direct artist colleagues, such us Balthasar Schwan and Georg Keller, who also worked for the publishers, and who also knew how to draw from the extensive collection of images of the Frankfurt publishers Johann Theodor de Bry (whose publishing house was at times partly transferred to Oppenheim) and Lucas Jennis. In particular, the still unresolved role of the widely-travelled artist as an intimate connoisseur of alchemical matter will be examined more closely in the context of his friendly relationship with De Bry and Jennis. 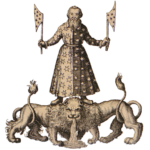